We invite you to join us in exploring the diversity of our faith community throughout the year at the events below. The archdiocese hosts an annual Mass celebrating the legacy of Rev. Dr. Martin Luther King Jr. each year in January. The Archdiocese of Washington Gospel Mass Choir performs a musical program of spirituals, Gospel, and traditional Catholic music celebrating our common mission to work for social justice for all of God’s people. The Archdiocese of Washington is a microcosm of the rich diversity that makes up the United States. This diversity is the result of various and continuous waves of immigration throughout its history that enriches the Catholic Church. Celebrating National Migration Week gives us the opportunity to rejoice in our diversity, and to show the Church’s solidarity with migrants and refugees. Learn more about our Pastoral Care for Migrants and Refugees efforts. The National Day of Prayer for the African American and African Family was created by Fr. James Goode, OFM in 1989 for our communities to set aside a special day to join in solidarity with our African-American and African brothers and sisters, to give thanks to God for our families and place our every care in the arms of Jesus. At the Inter-Religious Prayer Service, which takes place during National Migration Week, we gather together with leaders and faithful of various religious traditions to pray for the needs of migrants, refugees and victims of human trafficking. 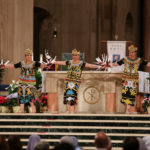 Asian and Pacific Islanders from different cultures, countries and up and down the East Coast gather at the Basilica of the National Shrine of the Immaculate Conception to celebrate their rich faith and heritage. Families wearing colorful native dresses process down the basilica’s center aisle with banners and holding icons representing their country’s image of Mary. World Day of Prayer for the Church in China – May

In 2007, Pope Benedict XVI proclaimed world Day of Prayer for the Church of China as an act of solicitude and solidarity with the faithful of Asia. Locally, members of the Chinese Catholic community celebrate an evening of prayer, inviting the archdiocesan community to participate in this special bilingual service. Celebration of the Saints of Africa – First Saturday in June

Each year African and African-American communities gather to celebrate the saints of Africa with a Mass, Rosary procession, youth forum, choir concert and social. The African Catholic Association organizes this annual event under the auspices of The Roman Catholic Archdiocese of Washington and in collaboration of USCCB. The Archdiocese of Washington and the Filipino Catholic Community celebrate the Feast of San Lorenzo Ruiz, the first Filipino martyr and saint, each year with a special Mass. San Lorenzo Ruiz was a layman, husband and father born in Binondo, Manila, around 1600. He was beatified by Pope John Paul II in Manila on February 18, 1981, and canonized in Rome Oct. 18, 1987. The Office of Cultural Diversity and Outreach sponsors the Archdiocese of Washington’s annual Walk with Mary celebration honoring Our Lady of Guadalupe, Patroness of the Americas. This special celebration begins with a procession that leaves from the Shrine of the Sacred Heart and concludes at the Basilica of the National Shrine of the Immaculate Conception with a Rosary and a Mass.

Contact the Office of Cultural Diversity and Outreach for more information.