Wilton Cardinal Gregory is the seventh Archbishop of Washington. He was ordained a priest of the Archdiocese of Chicago on May 9, 1973, and three years after his ordination began graduate studies at the Pontifical Liturgical Institute (Sant’ Anselmo) in Rome. There, he earned his doctorate in sacred liturgy in 1980.

After having served as an associate pastor of Our Lady of Perpetual Help Parish in Glenview, IL as a member of the faculty of St. Mary of the Lake Seminary in Mundelein and as a master of ceremonies to Cardinals John Cody and Joseph Bernardin, he was ordained an auxiliary bishop of Chicago on December 13, 1983. On February 10, 1994, he was installed as the seventh bishop of the Diocese of Belleville, IL where he served for the next eleven years. On December 9, 2004, Pope Saint John Paul II appointed Bishop Gregory as the sixth archbishop of the Archdiocese of Atlanta, and he was installed on January 17, 2005. Pope Francis appointed him as the seventh Archbishop of the Archdiocese of Washington on April 4, 2019. He was installed on May 21, 2019. On October 25, 2020, Pope Francis named Archbishop Gregory one of thirteen new cardinals from around the world. Cardinal Gregory was elevated by Pope Francis to the College of Cardinals in a November 28, 2020 Consistory in Rome.

Cardinal Gregory currently serves as a Member of the Vatican Dicastery for the Laity, Family and Life and on the Board of Trustees for the Papal Foundation.  Additionally, he is the Catholic Co-Chair of the National Council of Synagogues consultation for the United States Conference of Catholic Bishops (USCCB).

Cardinal Gregory is Chancellor of The Catholic University of America and Chairman of the Board of Trustees for The Basilica of the National Shrine of the Immaculate Conception.

Cardinal Gregory has served in many leading roles in the U.S. church. In November 2001, he was elected president of the U.S. Conference of Catholic Bishops (USCCB) following three years as vice president under Bishop Joseph Fiorenza of the Diocese of Galveston-Houston. During his tenure in office, the crisis of sex abuse by Catholic clergy escalated; and under his leadership, the bishops implemented the “Charter for the Protection of Children and Young People.”

He has served on the USCCB’s Executive and Administrative Committees, the Administrative Board, the Committee on Doctrine and the U.S. Catholic Conference Committee on International Policy. Previously, Cardinal Gregory served as the chairman of the Bishops’ Committees on Personnel, Divine Worship and the Third Millennium/Jubilee Year 2000 from 1998-2001, and Liturgy from 1991-1993.

Cardinal Gregory has written extensively on church issues, including pastoral statements on the death penalty, social justice, and euthanasia/physician-assisted suicide. Cardinal Gregory has published numerous articles on the subject of liturgy, particularly in the African-American community.

In 2006, Cardinal Gregory joined an illustrious group of preachers with his induction into the Martin Luther King, Jr. Board of Preachers at Morehouse College, Atlanta. At the National Pastoral Life Center in Washington, D.C., Cardinal Gregory was honored with the Cardinal Bernardin Award given by the Catholic Common Ground Initiative (2006).

The images below are free use and in the public domain. For questions or more information, contact [email protected]. 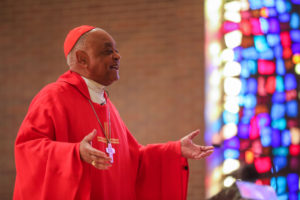 Cardinal Wilton D. Gregory celebrates a December 3, 2020 Mass of Thanksgiving at the Archdiocese of Washington Pastoral Center after his elevation to the College of Cardinals.

Then-Archbishop Wilton D. Gregory celebrates Mass at the Basilica of the National Shrine of the Immaculate Conception after being installed as Archbishop of Washington on May 21, 2019.