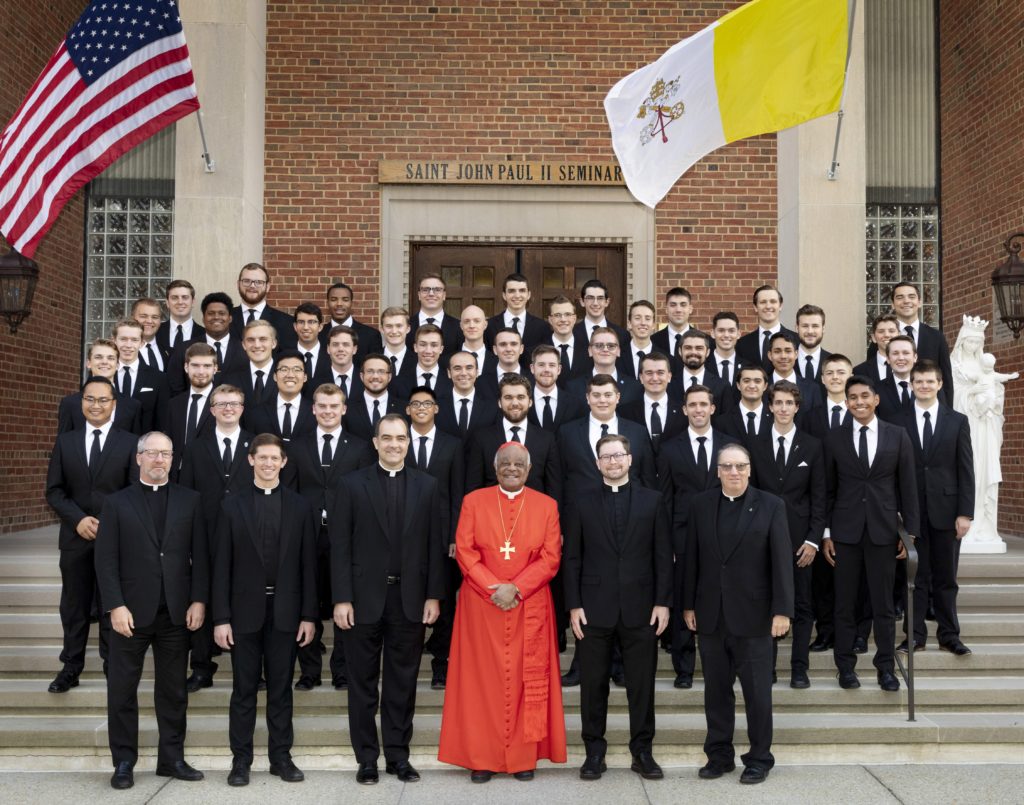 Saint John Paul II Seminary is an initiative of The Roman Catholic Archdiocese of Washington to prepare college-age men and young adults for entrance into major seminary and eventual ordination to the Catholic priesthood.

Situated next to the campus of The Catholic University of America, the facility can accommodate approximately thirty men who reside at the seminary and attend classes at Catholic University.  Those pursuing an undergraduate degree enroll in a normal schedule of classes with a major in philosophy, while those already possessing an undergraduate degree take a special non-degree program for two years with an emphasis in philosophy and ancient languages.

Admission to Saint John Paul II Seminary is granted to those who are admitted to the priestly formation program of The Roman Catholic Archdiocese of Washington, subject to the decision of the Archbishop of Washington.

The mission of Saint John Paul II Seminary is to provide an environment that forms men to be committed disciples of Christ who are free to respond to God’s call to the priesthood, including the call to the celibate life.

It is an environment that strives to form well-rounded Christian men characterized by a life of holiness, human virtue, and generous service. Such a life is nurtured by a deep interior life of prayer and sound piety, filial devotion to the Blessed Virgin Mary, and a profound love for the universal and local Church. It is further nourished through a rigorous intellectual formation in a faithful and loving obedience to the Magisterium and the sacred truths entrusted to the Church.

The Seminary strives to instill the pastoral charity and priestly witness modeled by its patron, Saint John Paul II, and fulfills its mission through a balanced program of spiritual, human, intellectual, and pastoral formation, as outlined in Pastores Dabo Vobis and the Program of Priestly Formation.

Great things start first as ideas. Someone has a vision which will make things better, a way of improving something that matters. Saint John Paul II had a vision, and what he saw was that the mission given by Jesus Christ to the Church should be brought to completion (Phil 1:6). During his life, his priesthood, and ultimately his pontificate, every waking moment was dedicated to making that vision a reality.

That priestly example inspired Donald Cardinal Wuerl, Archbishop Emeritus of Washington, to give the archdiocese its own place where men could be trained for service as diocesan priests. The idea became a reality on October 22, 2011 when Cardinal Wuerl formally dedicated Saint John Paul II Seminary. That day was the culmination of a great deal of hard work, determination and prayer.

The process formally began May 1, 2011 when Cardinal Wuerl, judging it expedient to erect a seminary for college and pre-theology, signed the Decree of Erection. Having just moments before concelebrated the Beatification of the future saint in St. Peter’s Basilica in Rome, Cardinal Wuerl founded the first seminary in the world with Saint John Paul II as its patron.

The site chosen for the new seminary was 145 Taylor Street in northeast Washington, a building originally built in 1951 by the Franciscan Friars of the Atonement to train future priests. Eventually, the building was purchased by the Archdiocese of Washington when the Atonement Fathers moved back to their provincial headquarters in Garrison, New York. For some time, the space was used for diocesan offices including the Catholic Standard, El Pregonero and the Catholic Youth Organization.

Renovations had begun even before the decree was signed by the Archbishop. The building was transformed, with special attention given to restoring the chapel, the heart of our new home. The seminary is fortunate to have in its chapel the altar used by Pope Benedict XVI at the Mass at Nationals Park April 17, 2008, the altar-stone used by Bishop John Carroll, first bishop of the United States, and a First Class Relic of Pope John Paul II on display.

Even before the seminarians could begin their school year at the Catholic University of America, the renovation of their new home was not complete. For the first two months of the seminary’s existence, the Society of St. Joseph (an Order known as “the Josephites”) generously offered the seminarians and faculty the fourth floor of their seminary – located about a mile from the seminary’s present location – so that they could live in a communal setting according to their own seminary rule of life.

These initial years have been richly blessed. Two years after the seminary opened, in the fall of 2013, Saint John Paul II Seminary received the first seminarians from outside the Archdiocese. In September of 2015, the seminary had the tremendous honor of welcoming, during his trip to the United States, His Holiness Pope Francis for a short visit to encourage our seminarians in holiness, prayer, and joy. Later that fall, Phase II of the seminary was dedicated. D’Aniello Hall includes a spacious Cardinal Wuerl Library with an initial collection of approximately 10,000 volumes donated by Rev. Kenneth Haydock as the Haydock Collection. In addition to the library, D’Aniello Hall includes 20 new seminarian bedrooms, a common room, and an exercise facility.

In August of 2017, Cardinal Wuerl dedicated the third and final phase of the seminary, which includes the Comstock Conference Room and a new refectory. In addition, the previous refectory was transformed into a conference room as well as rooms dedicated to spiritual direction.

had the joy of welcoming Archbishop Wilton Gregory to the Archdiocese of Washington. Archbishop Gregory has visited the seminary a number of times, reflecting his solicitude for the seminarians and his desire that the formation program continue to flourish.

When the COVID-19 pandemic required seminarians to disperse in March 2020, formation continued through remote media – spiritual direction, formation advising, talks, and even virtual gatherings. Through this challenging time, the Lord continued to bless each of the seminarians throughout the academic year until the very end, when the seminary graduated its largest class to date.

During its tenth year, seminarians were once again able to live in community and rejoiced in the many blessings that the Lord showered upon the seminary during the otherwise difficult time of pandemic.

As the seminary enters its second decade of existence, please pray that these young men may continue to be formed as true disciples of Christ, ready to embrace the great privilege of the priesthood according to the mind of the Church, and following in the footsteps of their saintly patron, Pope St. John Paul II.