The Coat of Arms of Wilton Cardinal Gregory 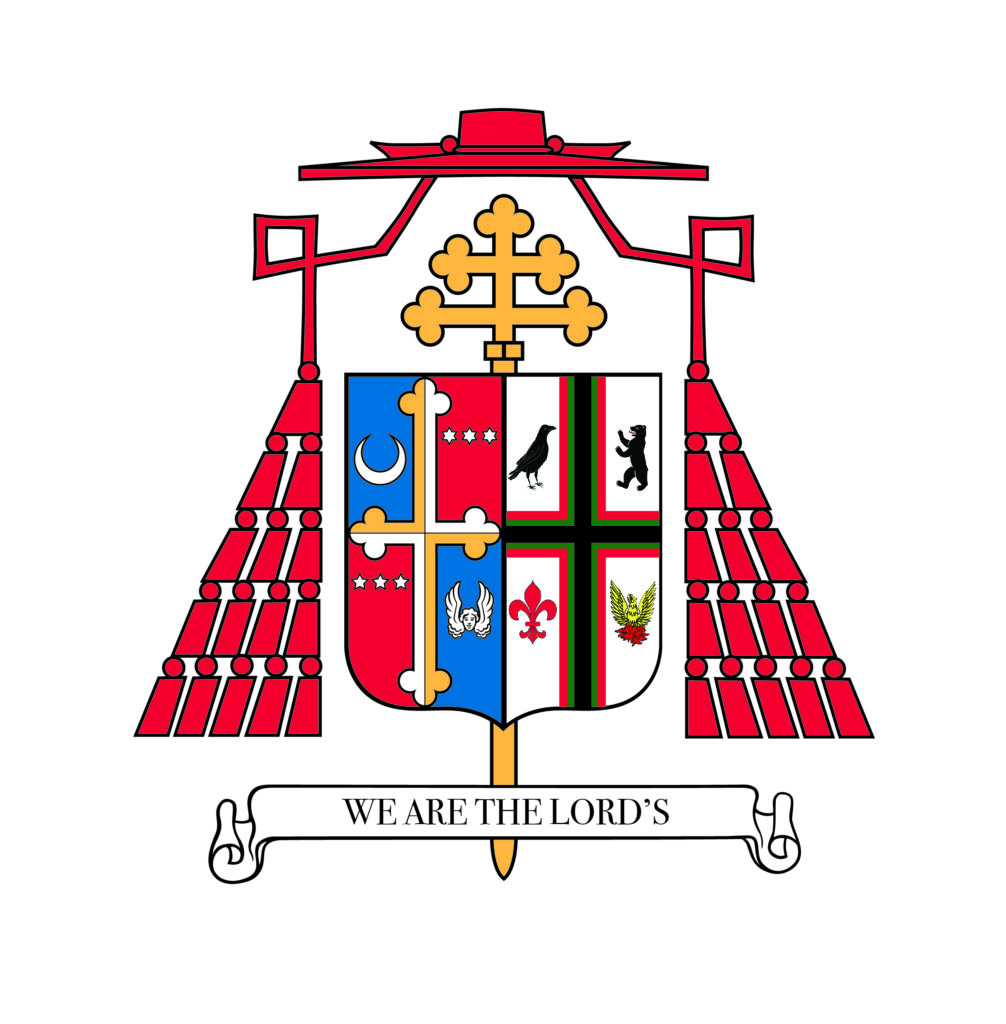 Arms impaled. In the dexter: Quarterly azure and gules, a cross bottony over all quarterly or and argent; 1, a crescent argent; 2, three mullets of six points fesswise in chief argent; 3, as many mullets of five points fesswise in chief argent; 4, a head erased affronté and winged all argent. In the sinister: Argent, on a cross gules a cross sable fimbriated vert; 1, a raven proper; 2, a bear rampant of the third; 3, a fleur-de-lis of the second; 4, a phoenix or issuant from flames of the second.

The dexter impalement (on the observer’s left) displays the arms of the Archdiocese of Washington, which consist of a shield quartered in blue and red, charged with a cross bottony—each limb terminating in three knobs—quartered in gold (yellow) and silver (white), based on the cross in the arms of Maryland. The cross, in the traditional papal colors, together with the red, white and blue of the rest of the design, symbolizes the presence of the Catholic Church in Washington, D.C., the nation’s capital, and in the surrounding Maryland counties of Montgomery, Prince George’s, St. Mary’s, Calvert, and Charles.

In the first quarter is a silver crescent, a traditional symbol of the Blessed Virgin Mary, patroness of the Archdiocese and patroness of the United States under the title of her Immaculate Conception. The three six-pointed silver stars in the second quarter are taken from the arms of Pope Pius VI, who reigned at the time of the Declaration of Independence. The three five-pointed silver stars in the third quarter are adapted from the arms used by Washington, D.C., which are the arms of George Washington. In the fourth quarter, the man’s face between two wings in silver represents the “man” envisioned in Ezekiel 1 and Revelation 4, a traditional symbol of Saint Matthew the Apostle and Evangelist, the patron of the Cathedral.

The sinister impalement (on the observer’s right) displays the personal arms of Cardinal Gregory, adopted when he was appointed as Auxiliary Bishop of Chicago and used by him as Bishop of Belleville and as Archbishop of Atlanta.

On a silver (white) field is a black cross, edged in green, over a red cross. These colors are known as the African-American colors, and by their use on the cross Cardinal Gregory honors the religious and racial heritage that has come to him from his parents, Wilton and Ethel (Duncan) Gregory.

In the first quarter is a raven, to honor the Cardinal’s Benedictine education at the Pontifical Liturgical Institute Sant’ Anselmo in Rome. The black bear in the second quarter is taken from the arms of His Eminence, Joseph Cardinal Bernardin, his principal episcopal consecrator. The fleur-de-lis in the third quarter, here in red, is taken from the arms of the Mundelein Seminary in Chicago, where Cardinal Gregory was both a student and faculty member. In the fourth quarter a golden phoenix coming forth from red flames honors the City of Chicago, reborn after the Great Fire of 1871.

Behind the arms is placed a gold double-traversed cross, symbolic of the archiepiscopal rank. Over the whole achievement is a cardinal’s hat, or galero, with fifteen tassels pendent on each side in five rows, all in cardinalatial red.

For his motto, Cardinal Gregory has “We are the Lord’s,” taken from St. Paul’s Epistle to the Romans, which expresses his deep Christian belief: “For if we live, we live for the Lord, and if we die, we die for the Lord; so then, whether we live or die, we are the Lord’s” (Romans 14: 8).