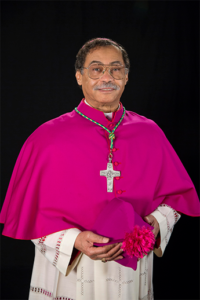 Bishop Campbell was raised in Washington, DC, he is a life-long resident of the archdiocese where he attended Bruce Elementary, Shrine of the Sacred Heart School, Archbishop Carroll High School, and Howard University. In 2007 was ordained to the priesthood and his parish assignments have included Saint Augustine’s, Immaculate Conception, and Assumption Catholic Church in Washington and current assignment is pastor of Saint Joseph Catholic Church in Largo.

Background Information on the Black Bishops of the United States Although African American Catholics are among the smaller constituencies of the Catholic Church in the United States we had over recent years some several hundred black priests from which these aforesaid bishops were chosen. Most of the ordinations of black priests in this country took place in the 1970s and 1980s; vocation numbers tapering off thereafter. Right now priestly numbers in the African American community across the country hover around two-hundred. We need more priestly vocations in the Church in America in general and more African American priests in particular. Twenty-four bishops of African descent appointed over the years for the United States is a milestone. Currently ten are active and six are retired. Of the active African American Bishops, six are Ordinaries or heads of dioceses, i.e., Gregory, Steib, Ricard, Guillory, Murry and Braxton.

Concern registers from different circles in the African American Catholic community about how long we can maintain this representation of bishops given the much shrinking numbers of ordinations of black Catholic priests in the United States.

The first whom history would call a bishop of African descent in the United States is James Augustine Healy (1830-1900). The Healy children had an Irish Father (Michael Morris Healy) who was a slave owner and a slave woman (Mary Eliza) of fair complexion as their mother. Both Healy parents died in 1850 several months apart. Three of the daughters became nuns. The movements of the Father in majority society and the fair complexion of his sons eased their participation in broader society and entrance into the ranks of the clergy of four of the ten children. As the first priests of African descent in the United States: two entered the Jesuit Order, one of whom became rector and later president of Georgetown University in Washington DC and two were Diocesan priests of Boston. James Augustine was ordained priest at Paris’ Notre Dame Cathedral, June 10, 1854, for service in the diocese of Boston and would be given tasks as Chancellor and Vicar General of the Diocese and later became 2nd bishop of Portland, Maine in 1875.

The 19th century was a different time as far as the politics of race relations went. There is no record of assertive or visionary articulations on Bishop Healy’s part for the plight of black Americans. It is said there were several hundred black Catholics in Boston during his tenure and an even larger number of Native Americans.

There would not be another African American bishop until Divine Word Father Harold R. Perry, SVD, appointed October 2, 1965 titular bishop of Mons in Mauretania and auxiliary bishop of New Orleans. So long was the break between the first and the second black bishops that Perry’s consecration was indeed a monumental achievement for the 1960s given the Civil Rights saga and The Black Power Movement and considering the overall tumultuous impact of that era on the black community as backdrop. In fact, at his consecration there was a group of white protestors with racist placards demonstrating outside St. Louis Cathedral in New Orleans. Bishop Harold Perry died July 17, 1991 after a long illness.

The National Black Catholic Clergy Caucus was created at a media reported meeting in Detroit in the turbulent spring of 1968. That meeting acknowledged racist practices in the Church and among other items called for greater numbers of black priests and bishops. Thereafter, we witnessed the appointment of thirteen black bishops for the decades of the 1970s and 1980s chiefly by Ordinaries complementing black Catholic populations in their dioceses:

Bishop James Augustine Healy, D.D. 1830-1900, He was born as a legal slave in the State of Georgia, he became the first person of African-American decent to become a Roman Catholic bishop in the United States.

Most Rev. Harold R. Perry, S.V.D., D.D. Harold Robert Perry (born October 9, 1916 at Lake Charles, Louisiana) was the eldest of six children born to Frank and Josephine Perry. In 1930, he began his studies for the priesthood at St. Augustine Seminary, Bay St. Louis, Mississippi. In 1938, he took his vows as a member of the Society of the Divine Word (SVD) and was ordained a priest in 1944. Father Perry served as a pastoral minister from 1944 to 1958 in parishes in Louisiana, Arkansas, and Mississippi. From 1958 until 1964 he was Rector of St. Augustine Seminary at Bay St. Louis. In 1964, he was appointed as Provincial Superior of the Southern SVD Province in the USA. In January 1966, he was consecrated as Auxiliary Bishop of New Orleans, a position he held until his death on July 7, 1991. Bishop Perry was a member of the SVD for 53 years, a priest for forty-seven (47) years, and he was a bishop for twenty-five (25) years. Although he was a man of deep loyalty and conviction, he stand for moderation in the turbulent 1960’s brought him much criticism and rejection in its wake. He will long be remembered as an advocate of peace and justice and as a man of God.

Josephite Father Eugene A. Marino, SSJ was appointed titular bishop of Walla-Walla and auxiliary bishop of Washington on July 11, 1974. He was later appointed Archbishop of Atlanta March 10, 1988; he resigned the archbishopric July 10, 1990 and died November 12, 2000.

Divine Word Father Joseph Abel Francis, SVD was appointed titular bishop of Valliposita and auxiliary bishop of Newark on May 3, 1976 and served there until his death September 1, 1997.

Chicago priest Wilton D. Gregory was appointed titular bishop of Oliva and auxiliary bishop of Chicago October 31, 1983. Ten years later he was appointed bishop of Belleville in Illinois. He was elected the first African American president of the Conference of Catholic Bishops of the United States (USCCB), a post he held for the standard three year term 2001-2004. Bishop Gregory was appointed Archbishop of Atlanta on December 9, 2004.

Divine Word Father James Terry Steib, SVD was appointed titular bishop of Fallaba and auxiliary bishop of St. Louis on December 6, 1983 and was later appointed bishop of Memphis in Tennessee on March 23, 1993.

Josephite Father John H. Ricard, SSJ was appointed titular bishop of Rucuma and auxiliary bishop of Baltimore on May 28, 1984 and was appointed bishop of the Diocese of Pensacola-Tallahassee, Florida on January 21, 1997. Bishop Ricard retired in 2011.

Divine Word Father Leonard Olivier, SVD was appointed titular bishop of Legia and auxiliary bishop of Washington on November 10, 1988 and retired on May 18, 2004

Chicago priest Edward Braxton was appointed titular bishop of Macomades-Rusticiana and auxiliary bishop of St. Louis on March 28, 1995. And was later appointed bishop of the Diocese of Lake Charles in Louisiana on December 12, 2000 and was transferred as bishop of Belleville, Illinois, March 15, 2004.

Jesuit Father Gordon B. Bennett, SJ was appointed titular bishop of Nesqually and auxiliary bishop of Baltimore on December 23, 1997. Bishop Bennett became bishop of the Diocese of Mandeville on the Island of Jamaica on July 6, 2004. A turn with his health saw Bishop Bennett resigned the bishopric August 8, 2006.

Pensacola-Tallahassee priest Martin D. Holley was appointed titular bishop of Rusubisir and auxiliary bishop of Washington on May 18, 2004.

Brooklyn priest and Haitian American, Guy A. Sansaricq was appointed titular bishop of Glenndalocha and auxiliary bishop of Brooklyn on June 6, 2006.

Of the 24 black bishops appointed, ten were taken from the Diocesan clergy and fourteen from religious orders and societies. The latter number represents the larger numbers of black priestly vocations found from the ranks of religious communities and chiefly, in this instance, communities that have historically ministered to the black community, such as, the Divine Word Fathers-SVD (7), the Josephite Fathers-SSJ (3). Then we have from the Jesuit Fathers-SJ (2) the Franciscan Fathers-OFM (1); the Edmundite Fathers-SSE (1).

Our black bishops are sources of pride in the African American Catholic community. We trust they are symbols of faith and achievement for our young people, models of inspiration for our black priests, received as authoritative shepherds and teachers by the faithful at large.